"The one on the cover?
With the boots and the funny hat?
Is that Benedetto Blanis himself?"

More than almost anything in the world, I wish we had an authentic likeness of Benedetto—but that is asking for a very great deal. In the sixteenth and seventeenth centuries, Italian Jews seldom had their portraits done. Few could afford them—and those who could seemed to shun "graven images". 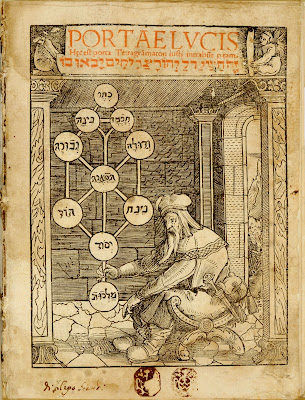 The man on the cover of Jews and Magic is Joseph ben Abraham Gikatilla (1248 - after 1305), a Spanish Kabbalist revered for his wisdom and his mystic powers—widely known as Joseph Ba'al ha-Nissim (Joseph the Master of Miracles). This fanciful image adorns the frontispiece of a popular version of Gikatilla’s most influential work: Sha’are Orah (Gates of Light), here translated into Latin as Portae Lucis. We are looking at a rare copy that has been in Florence for at least a few centuries (it is now in the Biblioteca Marucelliana, one of the city's oldest and grandest libraries.)

The full title, in fact, is Portae lucis haec est porta tetragrammaton (The Gate of Light, which is the Portal of the Tetragrammaton) — referring to the “four letters” that comprise the unspoken name of God.  Paolo Riccio, a German Jewish convert to Catholicism, published his translation in in 1516. (Riccio eventually settled at the University of Pavia and is usually known by his Italian name.)

In the course of ten chapters, Gikatilla presents some three hundred variants of the name of God. This scheme corresponds to the ten sephirot—the ten emmanations of the divine presence that structure most Kabbalistic practices. On the cover of his Latin edition, Riccio shows Gikatilla contemplating a rudimentary Tree of the Sephirot—labeled in Hebrew.  Inside, he offers a useful translation for his mostly non-Jewish readers. 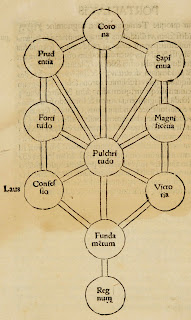 One of Benedetto Blanis' proudest achievements was borrowing and copying a fine Tree of the Sephirot for his great patron Don Giovanni dei Medici (see Jews and Magic, Chapter Seven, “Knowledge and Power”.) This was meant to guide them in their arcane pursuits (see Chapter Nine, "The Mirror of Truth") and after Don Giovanni's death, it was found among his most prized possessions. (His Medici cousins, no lovers of the occult, soon destroyed it. See Chapter Twelve, "Prison".) 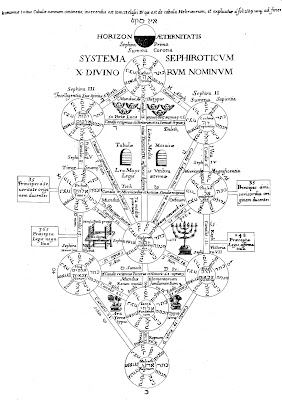 Riccio had no idea what Gikatilla looked like, so he offered a compelling archetype of the Hebraic Sorcerer. The “Master of Miracles” is dressed like a priest from the ancient —with long hair, a beard and a soft turban. 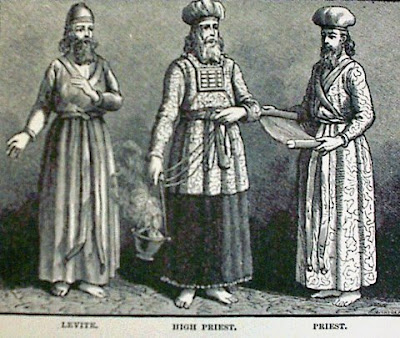 Riccio also incorporated another archetype—the Wandering Jew. Temple priests normally went barefoot on sacred ground, but Gikatilla is lumbered with heavy traveling boots (he also carries a pouch and a utility knife). He is a miracle worker in exile—empowered yet powerless—embarked on a long journey of cosmic exploration.

Benedetto Blanis certainly knew Gikatilla’s book and he presumably knew Riccio’s translation (it was much favored by his Christian patrons). When the Inquisition seized Benedetto’s library in the winter of 1619-20, they found another Kabbalistic work by the same author—the Ginat Egoz or . (See Chapter Eleven, “Curious and Forbidden Books”.)

Illustrations:
- Joseph Abraham Gikatilla, Portae lucis/Sha'are Orah/Gates of Light frontispiece), Augsburg 1516 (Florence, Biblioteca Marucelliana).
- detail.
- "by the Great God", in Italian and Hebrew; in a letter from Benedetto Blanis to Don Giovanni dei Medici (Florence, Archivio di Stato).
- Numerological exercise with the unspoken name of God (inscribed on the flyleaf of the Marucelliana copy of the Portae lucis).
- Details of Trees of the Sephirot (in Hebrew and Latin) from the Portae lucis (Florence, Biblioteca Marucelliana).
- Athanasius Kircher, Tree of the Sephirot in full elaboration, incorporating references to the ancient Temple.
- Priests in Regalia from the Ancient Temple (Charles Foster, History of the Bible, Philadelphia 1884).
- details.
- Florence, Synagogue (Tempio Maggiore Israelitico), Sanctuary Enclosure (and detail).